Using video as a tool for social change
July, 2001 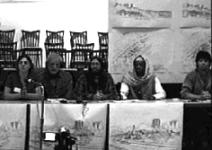 Portland's Dignity Village is a "safe, clean community-based alternative for those who are currently seeking shelter but are unable to find it," according to a proposal drafted by street roots and City Repair Project. In six months the village grew to a community of 80 people living in tents with a food preparation area, portable toilets, a storage tent, and a heated watch tent. During this time they were forced to move several times by government officials. In May, 2001, the community was informed by Erik Sten of City Council that they had until the end of June to vacate the land and that they would be arrested if they tried to set up again. In "Dignity Village 2001 and Beyond" (VB#39.13), villagers and supporters present their proposal for a permanent site and ask the City of Portland for a permanent home. Thankfully, the week we cablecast this program, they were granted an extension at the last minute to stay where they are for one year, and the City seems willing to discuss permanent plans.

The medical research establishment tells us that research on animals is necessary to obtain information about human conditions and cures for human illness. In "The Human Cost of Animal Research" (VB#39.8&9), Dr. Ray Greek, a physician, medical school instructor, and former animal researcher, debunks that myth. In his talk and slide show, he describes the fallacies involved in extrapolating the results of animal experimentation to humans. He explains why animal research is so prevalent, even though it does not contribute to human health and is actually a waste of taxpayers' money.

William Upski Wimsatt, the author of Bomb the Suburbs and No More Prisons spoke last year at a benefit for the Active Element Foundation and the Independent Publishing Resource Center. An impassioned proponent of the hip-hop culture, he covered a variety of issues, including community organizing, the need to bring different groups together, rape, how the prison industry is like lip balm, and the cool rich kids' philanthropic movement (Check out VB#38.3&4, "No More Prisons").

Comedian Kevin Nealon hosted the first annual Non-Fatal Bite held in Portland in August, 2000, on behalf of the IDA-Africa Chimpanzee Rehabilitation Sanctuary. "Benefit for the Chimps of Cameroon" (VB#38.6) features Dr. Sheri Speede who spoke about the origins of the sanctuary and the history of the rescued chimps. The program includes Speede's footage of the chimps in the sanctuary's jungle habitat and bits of Mr. Nealon's wry humor.

Take a Stand for the Planet

John Robbins rejected the opportunity to benefit from his family's Baskin-Robbins ice cream business, and instead became the Pulitzer Prize-nominated author of books such as Diet for a New America, May All Be Fed, and Reclaiming Our Health. He is the founder of EarthSave International, a nonprofit organization that supports healthy food choices, preservation of the environment, compassion for all life, and consumption of local organic produce. Robbins spoke at Portland’s First Unitarian in April 2001. In "John Robbins: Take a Stand" (SE #99), he talks with humor and compassion about the need today to take a stand - for the sake of our health, the animals, and the earth.

In October 2000, activists Will Seaman and Edith Mirante spoke at a symposium on genocide at Portland State University (PSU). Mr. Seaman of East Timor Action Network-Portland described the 1975 Indonesian invasion of East Timor, and detailed U.S. involvement under the guidance of then-Secretary of State Henry Kissinger.

Shortly before Seaman’s presentation, the new Indonesian government agreed to elections on the question of Timorese independence. In response, militia forces trained and supported by the Indonesian military engaged in brutality that forced hundreds of thousands of Timorese to flee to West Timor. Seaman points to the Clinton administration's renewing ties with the Indonesian military as the chief factor responsible for the surge in violence.  He concluded with a call for U.S. citizens to transform their foreign policy into one that rejects aggression and chauvinism for values of a genuine democracy.

Edith Mirante, long time activist and authority on Burma, described the human rights crisis imposed by the military regime there. Killings, rapes, forced relocation, burning of villages and forced labor of indigenous people are used by the military to suppress dissent and acquire wealth. Ms. Mirante detailed ways activists are working to free their country. She finished by quoting Aung San Su Chi, spiritual leader of the Burmese people: "We shall prevail. All they have are guns." Hear both speakers in our recent program, "Human Rights in Focus: East Timor and Burma," (VB #38.1).

Ann Wanjiku Gathumbi is president of the Coalition on Violence Against Women in Kenya, an organization that supports victims and advocates for changes in the Kenyan legal system. Women in Kenya are legally second-class citizens. Only men can bequeath citizenship on their spouses and children. Police do not typically intervene in incidences of domestic violence. Most cases are not reported, police records are often incomplete, and prosecutions are rare. In a March lecture at PSU, Ann Gathumbi spoke out against "Domestic Violence in Kenya" (VB #39.12), as part of an Amnesty International campaign to reframe violence against women as a human rights issue to be addressed by all governments. "Violence against women whether in private or in public is a human rights issue," says Ms. Gathumbi. "One of our goals is to empower women survivors of violence through counseling to enable them to bring social and political change in their lives and in their communities." She addresses the importance of international legislation in protecting women from violence.  The program also addresses how Kenyan women are combating the practice of female genital mutilation and discusses the cultural background of this practice. 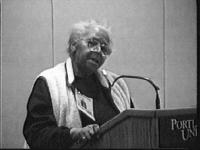 In the past year, a lot of attention has been put on Portland's police review system (formerly known as PIIAC), in which civilians file complaints and can appeal the Police Bureau's Internal Affairs Division (IAD) findings to City Council. In "Racial Profiling: The Case of Dora McCrae" (VB #39.1&2), an African-American grandmother and community volunteer brought her case before Council. It involved a Portland officer who pulled her forcibly from her car at a traffic stop in 1998. Three years after the incident, the allegations of "excessive force" finally got to Council after two civil suits failed to reconcile the case. McCrae's testimony was taken after police and police-friendly witnesses spoke at length; the only other eyewitness died of old age during the investigative process.  Members of the PSU NAACP put on a forum prior to the Council hearing, excerpts of which also appear on the program. The students and their supporters walk out after Mayor Katz casts the deciding vote to find "insufficient evidence" in the case.

A second program revolving around PIIAC demonstrates the danger of having police investigate complaints against other police. In this show ("Police Investigating Police? Portland's Review Board Feb. 2001", VB #38.7) IAD Lieutenant Steve Bechard defends police actions in a case where a suspect was taken forcibly to the ground.

Recently, there has been a strange phenomenon in the world of prostitution, an industry in which many women and children and some men have been subjugated, exploited, and then discarded by pimps and tricks. Lately, people in this industry have been organizing as "sex workers" and suggesting that the progressive community support this work. Patricia Barrera, MA and Joe Parker, RN have both worked with survivors of sex industries for many years. In "Should We Support Prostitution?" (VB #39.4&5), they say no, we should not support an industry which depends upon the sale of others' bodies. They describe the pimps and tricks who profit from it, the devastating effects on those prostituted, and call on us to condemn this practice.

"Challenges of Alternative Media" (VB #38.10) was a featured panel discussion at the May, 2000 End Corporate Dominance Conference at PSU. Flying Focus Video Collective's own PC Peri, Kathleen Stephenson of KBOO Radio, and Portland Alliance editor Dave Mazza discussed alternative media's audience, its relationship with mainstream media, and paid staff vs. volunteers.  They also explained how they deal with discouragement and setbacks, and considered the purpose of advocacy journalism.

Flying Focus is celebrating its 10th Anniversary this year. We are planning a public celebration later this year, perhaps including a live cablecast. If want to help plan such an event, have a house party, or do something else to help this fall, let us know.

New technologies at Portland Cable Access (PCA) have created opportunities and challenges for producers. For the most part, our shows look and sound better than they used to. However, due to the rare type of equipment being used (Digital-S, or "D-9"), we have a limited number of tapes to record on (a 64-minute tape costs about $30!) and no way to play them back in our office. We need to find some way to transfer our old programs to a stable, accessible digital format as well as to keep up with changes at the various access facilities in town. Also, PCA has posted a few "Busiversaries" on its website as RealMovie streaming video, bringing us closer to the ideal of getting our programs out to more people www.pcatv.org/ streaming_test.htm. If you have equipment, money, tapes, money, ideas, money, time, or money to donate to help us keep up in this dot-com world, please let us know. Especially if you have money to donate. Our recent fund-raising letter was designed to bring in $1000, but so far only $490 has come in.  Thanks for your support as we continue to put out programming not influenced by sponsors, corporations, or the government. We know you have a lot of people asking for your support, but by supporting Flying Focus, you help so many other groups and causes. Just look -- Animal Rights, Feminist Issues, Police Accountability, Alternative Media, International Human Rights--all are represented on our shows with contact information so people can get more involved!

We hope to hear from you soon.